The next morning four of us met up with the intention of heading to Pura Tirta Empul. This is a Hindu Balinese water temple located about 40-60 minutes (depending on traffic) from the town of Ubud. We hopped on our motorbikes and started the 15 km trip to the temple. Upon arriving we paid the parking and entrance fee and received our sarongs. We walked into the temple and got ready to get into the water. It turns out the sarongs we received for free were not to enter the water. So we had to pay to rent sarongs that were allowed in. Not knowing what we were meant to do, we asked a local and he asked us which ceremony we wanted to do, the simple or the full. We all decided on the full ceremony and he explained to us the full process. First we were to spend some time meditating before entering the water. Then we were to enter the first purification pool and start at the left-most spout. At the first spout we were to take three sips of water, dunk our heads three times, and then put our whole body under the water for as long as we could hold our breath. We were to repeat this for the first ten spouts, skip the 11th and 12th, and then repeat the ritual on the 13th. From there we were to enter the second purification pool to the right. We then repeated the same ritual for the spouts in the second pool. Finally we were to enter the third purification pool and repeat the ritual on the first spout. After that we would have finished the full ceremony. Being that we were in the water for the majority of time, I only have a few pictures from our time there. 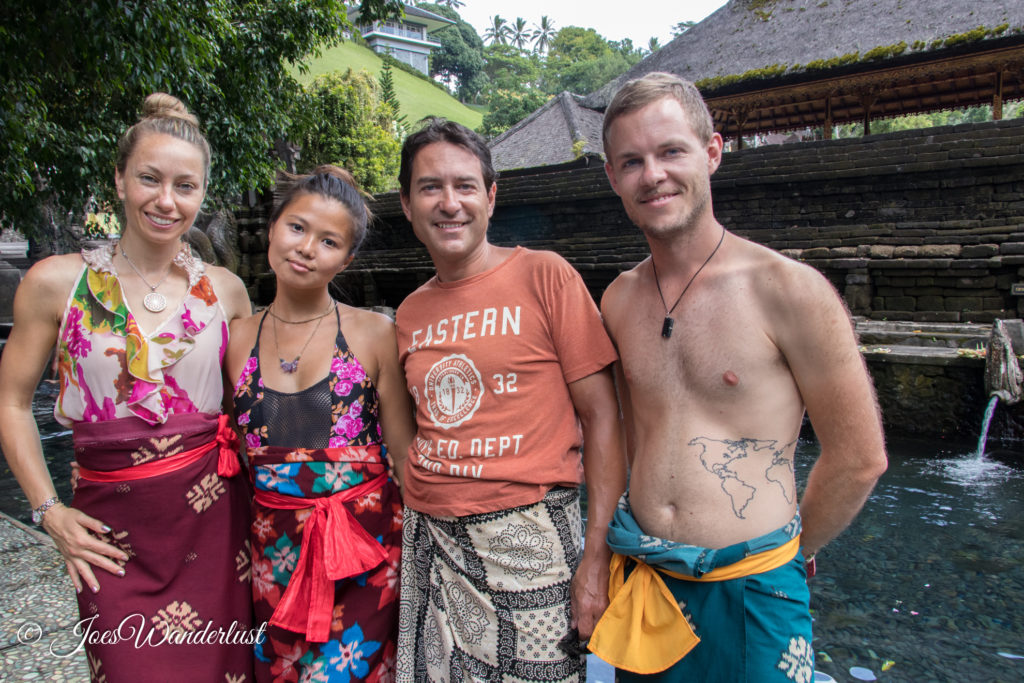 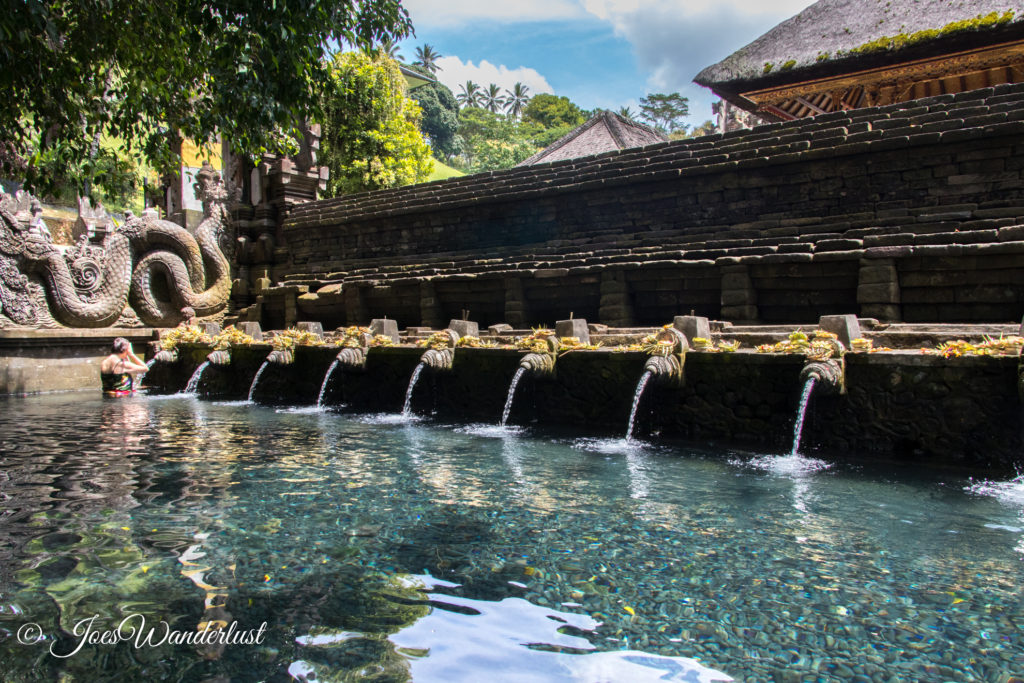 The first purification pool. I don’t know how I was so lucky to get a picture with only one person in it. 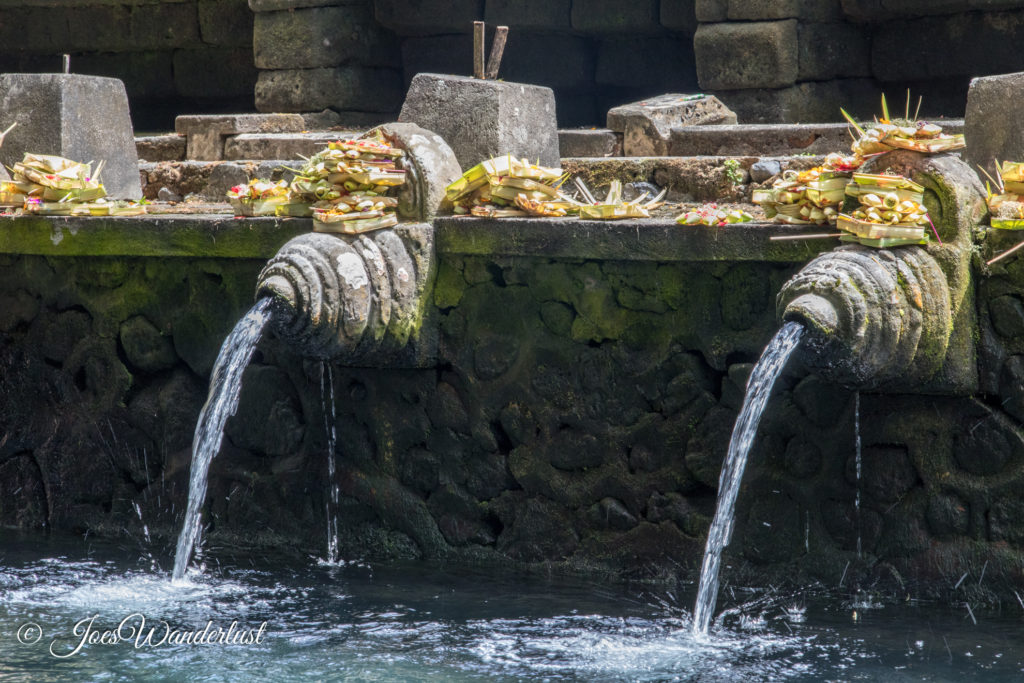 Say what you’d like, but after doing the full ritual I felt an amazing change. I believe that there is something special about these pools and the ritual. After finishing the ritual, all four of us, without speaking to each other, sat down and meditated again. After we discussed our experiences and we all agreed that the first few spouts we felt nothing special, but by around the 7th spout we all felt something. It continued until the end of the ritual, and we each felt truly purified at the end. 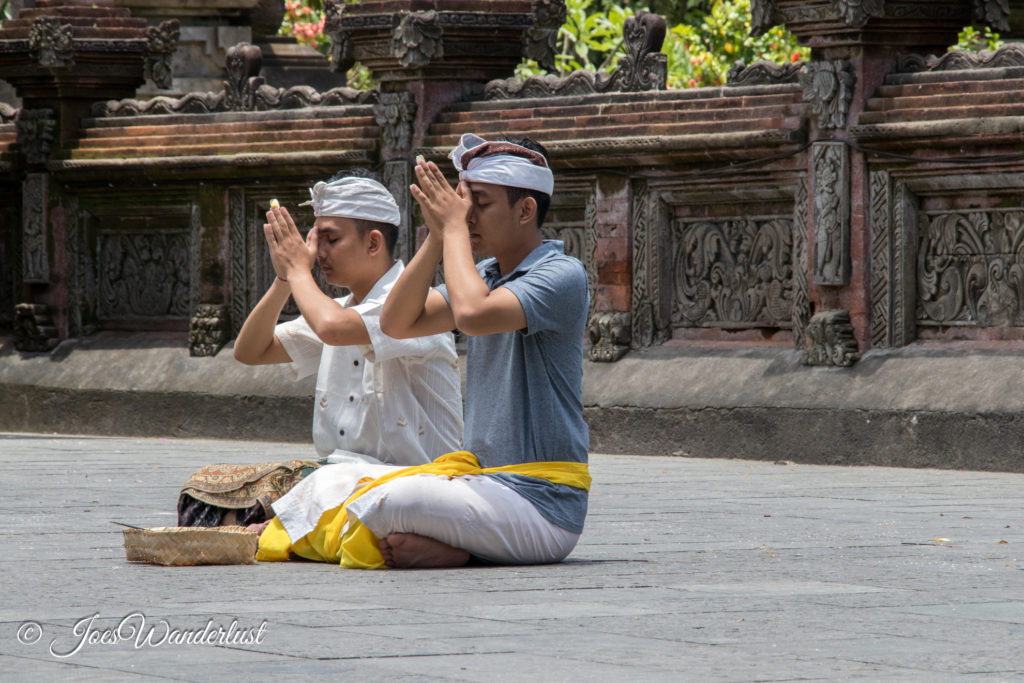 Behind the pools there is another part of the temple where another ritual was being performed. 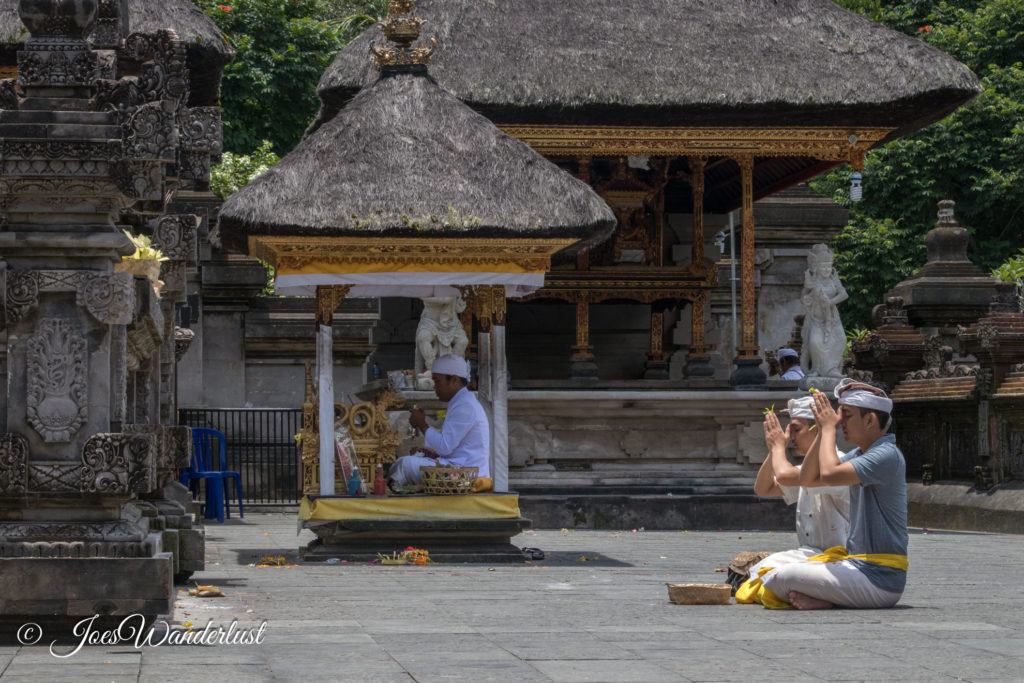 I’m not sure what was going on, but it was fascinating to watch.

After all the time I spent in Bali, Pura Tirta Empul ranks as one of my favorite places. It may be a large tourist attraction, but I believe that not many people go through the whole purification process. To most it is simply a nice view and a new cultural experience. For others, it can truly be an eye-opening experience at a whole different level. 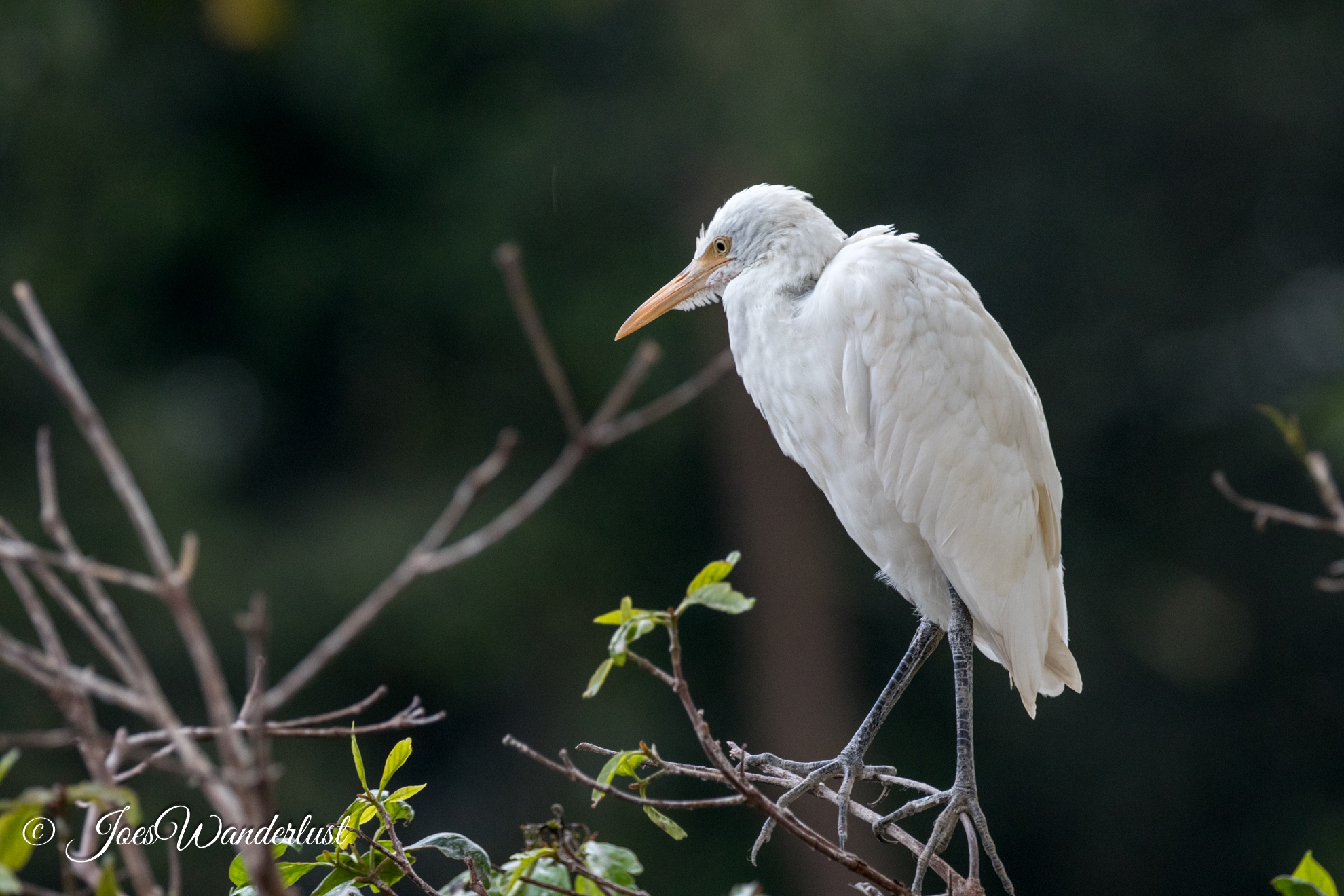 After checking in to my guesthouse and having a relaxing afternoon it was time for Petulu. I met up with my friend from Nepal, Georgina, and some people from couchsurfing and we got ready to head to Petulu. After getting a flat tire fixed on my motorbike we were off. Petulu is famous for the herons that come to nest in the trees every night. The herons of Petulu number in the hundreds, even thousands, and there are several different species. Arriving in the evening, before sunset, we were greeted by countless herons in settling in for a night in the trees. I don't think I've ever seen so many herons in one place.   ISO 800  f/5.6 ...
Indonesia May 4, 2017
May 4, 2017 ● Indonesia
READ MORE 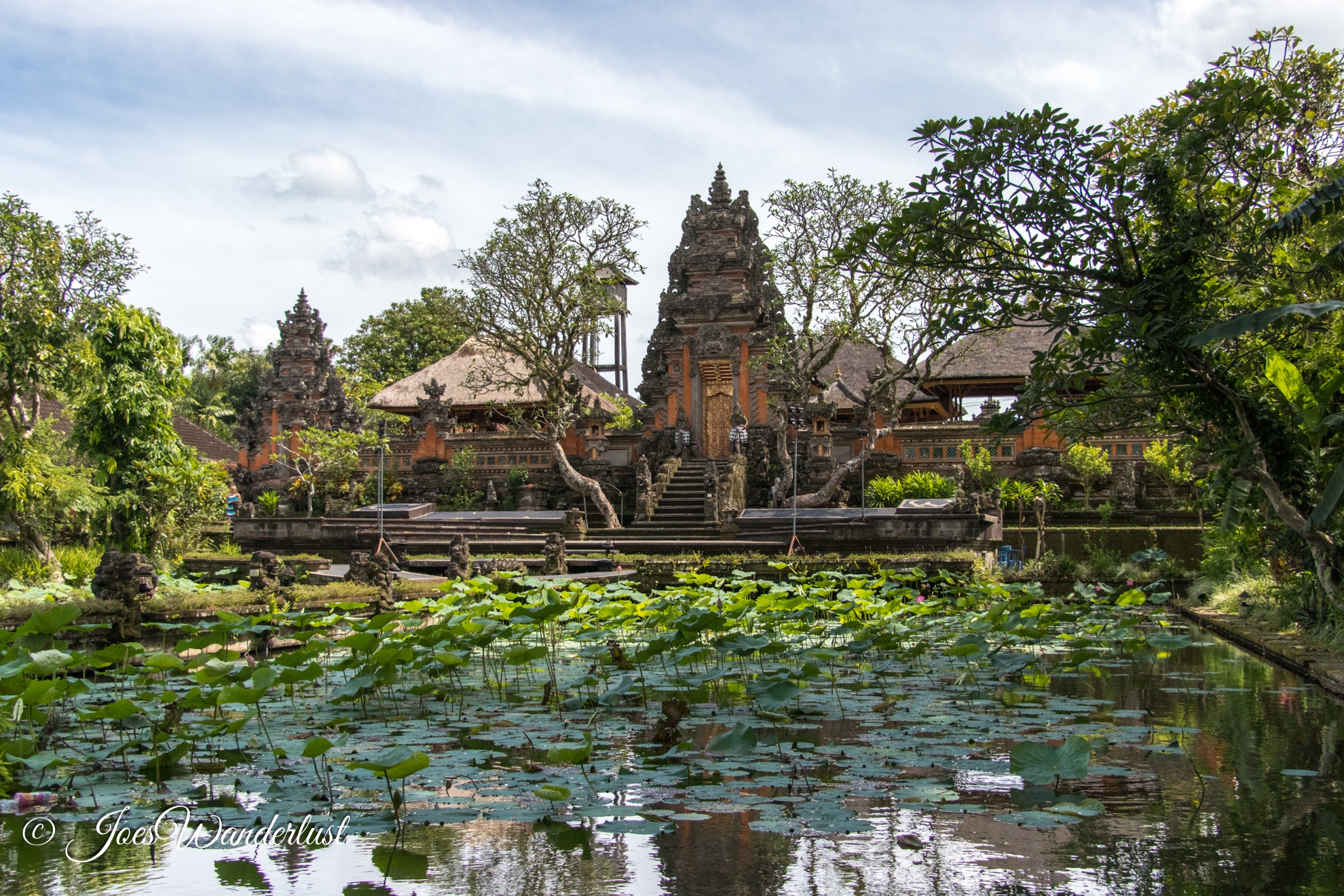 After a few days in Seminyak, I rented a motorbike and was off to Ubud. Ubud is a quaint yogi town about an hour north of Denpasar, it was here I'd spend the next few days. Upon arriving in Ubud it was too early to check into my guesthouse so I wandered around the Water Palace (Pura Taman Saraswati). I didn't take a ton of pictures, but I really enjoy the ones that I have.   ISO 400  f/4  1/4000 The front of the water palace before all the tourists started arriving.   ISO 100  f/5.6  1/1000 The lighting wasn't ideal for pictures, but my new camera was able to pull out a lot of detail from the shadows.   ...
Indonesia April 27, 2017
April 27, 2017 ● Indonesia
READ MORE 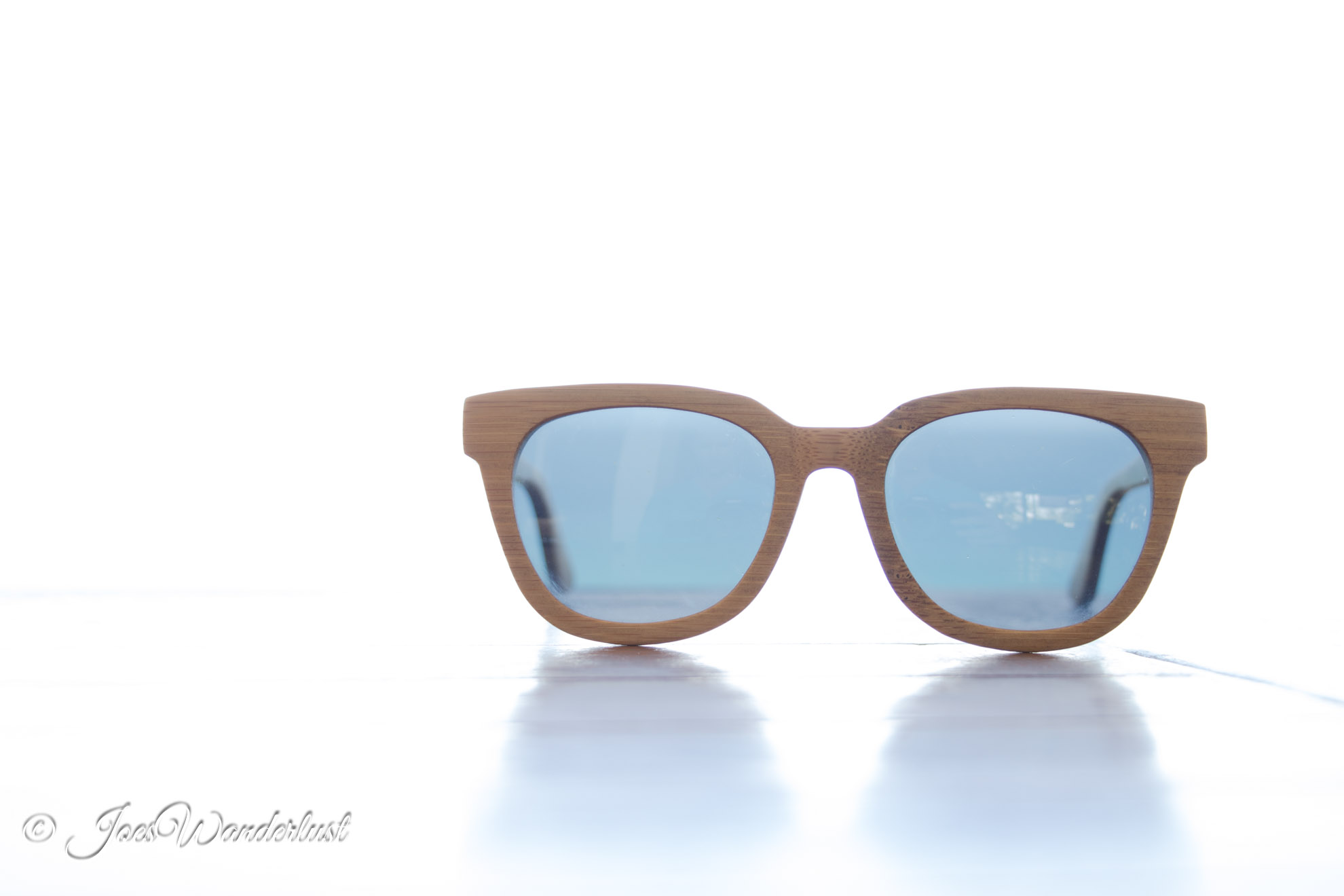 After my camera went swimming I was unable to take pictures for the rest of my time in the Philippines. I ended up spending almost a week in Manila (unplanned) in order to figure out a new camera. As I hee'd and haw'd over what to do I finally came to a decision the day before I left for Indonesia. I purchased a Canon 80D, a downgrade from the camera I had lost but a newly released camera nonetheless. And so, I present to you the first post with pictures from my new camera.   ISO 100  f/10  1/60 I was unsure of where to stay in Bali, so I ended up seeking a local's advice through Couchsurfing. I ended up staying with PJ and on m ...
Indonesia April 18, 2017
April 18, 2017 ● Indonesia
READ MORE